When my sister and I were kids, there was a bakery that made something like this. It is absolutely nostalgic! I used all butter instead of shortening. To make mine more like I remembered, I made my cookies much bigger (six to a pan), rolled them into big balls, and then flattened them down before baking. I used jumbo marshmallows. I used evaporated milk instead of cream and also instead of butter in the frosting. This made it really runny, which I wanted. While the marshmallows were still hot but had formed a slight film, I very gently patted them down to cover the cookie. I put the frosting in a plastic bag, cut off a corner, and piped the chocolate in spirals over the marshmallow and let it drip down the sides. The chocolate melted until it was level with the marshmallow, which was very dramatic (looks like a hypnotist spiral). Once the cookies returned to room temp the chocolate hardened. These are also good FROZEN. I didn't use pecans, simply because nuts are expensive during the summer. 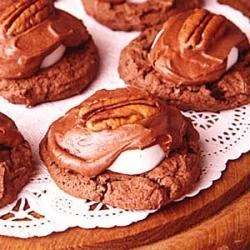