I had to put a pie shield on this before turning it down to 350 degrees, because the crust was already pretty browned. At the 350 temp. I had to bake 65 min. instead of the listed 35 minutes, (nearly twice as long). It still looked a little wiggly, but I didn't want it to burn, so I took it out of the oven at that point. It presented nicely coming out of the oven, so I waited a couple of hours to see if it would set up further. The first piece was sloppy, but the rest of it cut okay. It is not a thick custard like pumpkin pie. It has more of a slightly watery pudding type apple custard consistency. It is not very sweet, which I liked, but it is also not like anything I have ever eaten before to compare it to. No one since I have made it, has eaten more than one piece. So, although it was interesting to make a different type of pie, it is not something I would make again. 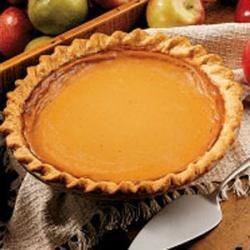