DELISH! I did use a 28 oz. can of peaches and kept all the other ingredients at the same measurements that they are currently. YUMMM! Very easy. I also added a bit of cinnamon on top of the peaches, then on top of the top layer as well. (I just did it to taste maybe a teaspoon or so)**Editing since making several times. I have found that is does not make a difference in flavor if I do not separate out 1/4 C. of the juice. I put it all in the pot when boiling and use a slotted spoon to spoon it out in the baking dish, so all of the juice doesn't go in, but plenty does. I have started putting cinnamon in the flour mix (instead of in the peaches as I mentioned before) and on top of the layers right before putting in the oven, I do this to taste. If you need to double this I would get a 28 oz. can and the size it calls for originally in the recipe, and double the rest of everything else. I put it in a 9x13 pan. It was still done in about the same amount of time. 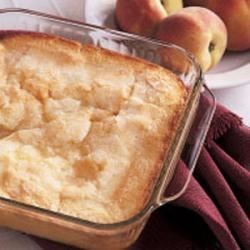