I chose this tonight because I didnt have a lot of time, and it sounded good. But before I started cooking it I read the reviews. So I figured I had to modify it a bit so... to cut back on the "tang" of it I added half a packet of powdery Ranch dressing & a couple splashes of EVOO.. I think that helped it a lot because it was delicious! My kids devoured it. I was worried they wouldn't like the dijon, but no one mentioned mustard at all! I also used chix tenderloins instead of breasts so the 15 mins or so I let it marinade was fine. If you use big breasts, I'd say at least an hour. I also just used my handy dandy indoor grill. (just throw it in the dishwasher) Served with baked beans (leftovers I had to use :) and carrots. Good quick chicken dish! Thanks for the idea! 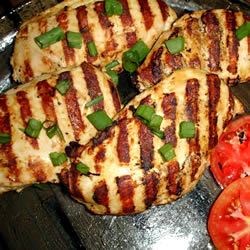