Classic, tried and true pound cake recipe with more or less standard ingredients and their measurements - however, the method of beating the egg whites separately is different from most I've ever seen. Simply because it's easier I stuck with the traditional creaming method, beating the sugar and butter together for a good few minutes until very light and fluffy, adding the eggs one at a time, beating well after each addition and, finally, adding the combined flour and baking soda (I also added 1/2 tsp. salt) alternately with the sour cream in three additions, beginning and ending with the flour. I didn't use the butter flavoring as I didn't see the point when butter was already in the recipe. Nor did I use the almond extract, preferring instead to simply use 2 teaspoons of vanilla. Since my tube pan is dark with a non-stick finish, I lowered the heat to 325 degrees and baked it about 75 minutes then let it cool in the pan for 15 minutes before turning out onto a wire rack. (I greased AND floured the pan) This is moist and buttery with a fine, compact and tender crumb. I topped it with a simple glaze of powdered sugar, a little vanilla, half-and-half and a dribble of corn syrup. Also, since a pint of blueberries is 2 cups, I just used the full pint rather than 1-1/2 cups, reserving a few to garnish the top along with sprigs of fresh mint. Four stars rather than five because of the distraction of the butter flavoring and the fairly large amount of almond extract. 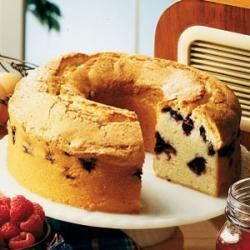