I made this for Father's day and it was SO delicious. It's 4 stars because the instructions were not clear and that made me feel very insecure while making the pie. If anyone else is lost and is using a top pie crust as well, this is what I did: 1. I laid a 9inch pre-made Pillsbury pie crust in a glass pie pan, baked it at 350 degrees for 10 minutes BEFORE EVERYTHING. 2. Pulled it out of the oven and poured a box of blueberries in the semi-baked shell. 3. Combined the rest of the ingredients in a sauce pan, including the remaining 2pints of blueberries. 3. Cooked it for lower heat until the sauce pan was high in blueberry sauce. You can add cinnamon or vanilla if you want. 4. Poured it on top of the uncooked blueberries in the pie, added a top criss-cross pie layer and baked it at 450 for about 11-13 minutes. 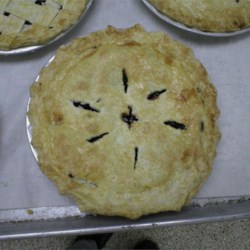