I used a mixture of ground pork, veal and beef. I chose to use cremini mushrooms as they have better flavour. Instead of using the listed spices I chose to use the blend 'Tourtiere Spices' from AR with the addition of allspice. I also used regular bread crumbs (though fresh would've been better- I was in a hurry though) and curly parsley. Overall it is much better than the commercially prepared version. The celery seemed a little out of place and I feel that the seasoning should have been put on the meat directly while cooking to infuse the flavour. 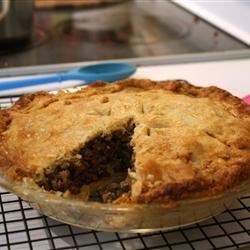