Skip to main content New<> this month
No Roll Pie Crust I
Reviews:

This pie dough was very strange and oily when I was trying to pat it in the pie pan. A rolling pin does make it easier to get a consistant thickness in the crust (next time) but figured I'd give it a go. Had enough dough to also make a small tart so as an experiment I prebaked the tart shell for 10 minutes before pouring the sweet potato pie in it. Both pie crusts were very good especially since they are much healthier (used canola oil). The prebaked shell had a little more texture, both were crisp and had good color around the edge. Very good flavor (not oily in my opinion) but I used the "Pecan Sweet Potato Pie" recipe which is sooo good that the crust is secondary. I will definitely use this recipe from now on but will use a little less oil, 1 teaspoon sugar, and less water to start. Probably prebake the crust too but either way ... very easy and healthier ... won't be going back to butter or Crisco. 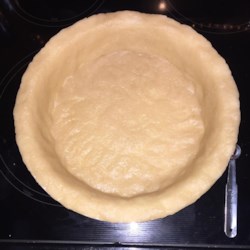 No Roll Pie Crust I