I don't really know why this recipe is so highly rated. The dill/curry/mayo combination was delicious... until I added it to the milk mixture, upon which the flavors instantly disappeared into the milky, floury blandness. I doubled the curry and increased the dill by 50%. The only other thing I did differently was use legs and thighs instead of breasts, because that's what I had. The problem was the sauce- too buttery and bland! If I make this again, I might add lemon juice to retain the tangy zip I so liked before mixing the sauce. I would also use a whole teaspoon of curry and double the dill. The person who suggested baking this in the same pan the chicken is browned in is a genius! I got to try out my big, all-stainless steel pan that I got for Christmas! Made it so much easier to make and clean. 04/16/2011 UPDATE: I made this again, this time using cut-up boneless skinless breasts, and I used 1 and a half tsp of dill and 1 and a half tsp of curry. I also added about 2 tsp of lemon juice to retain the zip of the mayo. turned out much better, but of course, the recipe is almost totally different from the original. Served this over white rice. Was good, but still not spectacular. I would only make this gain in a pinch, since there are few ingredients and it's easy. 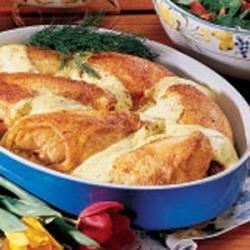