I wish I would have read all of the reviews first, before making this one! I was hesitant to make it using pre-made hashbrown patties, because they are so "greasy," compared to shredded potatoes or boiled and sliced ones. But, then I started making it before I also realized it had 4 CUPS OF CHEESE! That is the full amount in the larger bags of cheese. Most of the reviewers did what I should have and used half the cheese. My usual breakfast casseroles also have a sauce or soup that also makes them a little creamy to. This was kind of dry. I believe because it had to cook nearly 3X longer than other breakfast casseroles I have made. It got eaten, but if I made again I would have to re-work this to cut back on the greasiness. 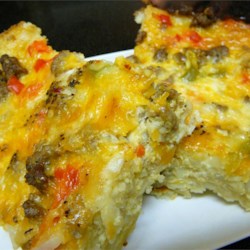