I 'tested' this recipe before taking it to a potluck. Following the recipe, I found the potatoes unevenly cooked, too large and chunky to stir into the sauce, and the cream cheese overpowering. The flavor of the potatoes was non-existent. I didn't spray the crockpot wih cooking spray, and the cream cheese burned onto the sides of the pot, after stirring, and the dish had a slightly burned taste after that. The second time, I doubled the recipe and cooked the whole thing on the stove and heated/served from the crockpot: boil potatoes util just barely done; make sauce in a mixing bowl; add sauce to potatoes and refrigerate in the crockpot. The next day, around 8:00 AM, put the crockpot on high, and the dish will be ready by 11:30. Stir every hour or so. I also cut the potatoes into eighths instead of fourths (easier to stir and serve) and added a soup can of 2% milk. The first time I used potato soup. The second time, after realizing that I'd just spent a LOT of time scrubbing, trimming, and cutting fresh baby red potatoes and then added the 'canned' potatoes in the soup, I used mushroom soup. 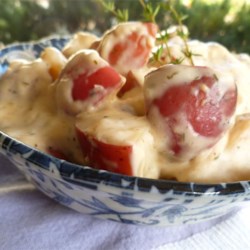