I made this the other night for my family, mind you, I'm VERY much a beginner cook. I followed the recipe for the most part, except a few little things here and there. I didn't bake the potatoes first, I just cubed them and cooked them in the chicken broth while I was sauteing the garlic and onions in the bacon grease, and I used that same grease to make a rue, which I think added a lot of flavor. I also crumbled up most of the pound of bacon I used and put it in the soup, and instead of half and half, I used half sour cream, and half heaving whipping cream, whisked that together and added it. I only used half the basil, which I'm glad I did because it had just the right taste. I tripled the recipe and there were STILL no leftovers! I also made the Cheddar Bay biscuits from this site to go with it, SO GOOD!! Other recipes don't even compare! =] 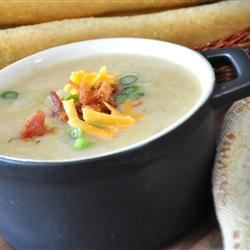