It’s gardening season at my house so I used fresh herbs instead of dried, six cloves of fresh garlic, the juice of one fresh squeezed lemon, around ¼ tsp. fresh cracked black pepper, unfiltered cider vinegar, a good squirt (around three tsp.) Dijon mustard, and only ½ of an onion that was about the size of tennis ball. Since this was a marinade, I decided to throw it all into the blender and frapped it. I took two large burpless cucumbers from the garden. Washed and peeled them and cut the length to about 1” shorter than the height of a one quart canning jar and ran them through my French fry cutter with the ½” blade in it. I then filled the jar with only the solid cucumber sticks, the seedy insides went to the juicer. I gave the marinade one last spin in the blender and poured it over the cucumbers, leaving about ½” headspace, vacuum sealed the jar, gave it a good shake and into the fridge it went for two days. You just can’t beat the flavor of fresh ingredients when they are available. The flavor was fantastic and this recipe went into my “Keeper” folder. I later poured the excess marinade over cut tomatoes and cucumbers that were fresh picked from the garden. Yummy! 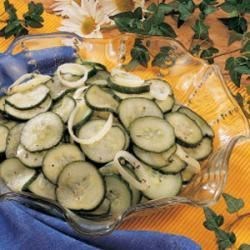