This was really good and so easy. I used french vanilla cool whip instead of regular. It was hard to spread the hot fudge around on the cool whip, so next time I will spread the cool whip on and then put it in the freezer until the cool whip firms up so I can spread the fudge on easier. I might also try toffee bits in place of the peanuts next time I make this. I cut some of the sandwiches into thin strips to fill in some of the gaps and it worked great. Thanks a lot! 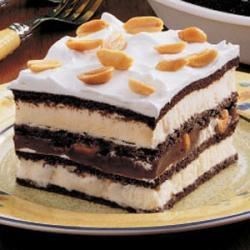