I made this recipe for 3 men and two teenagers ~ everyone had seconds. I used more peaches than called for (about 4 cups), increased the vanilla to 1 1/2 Tablespoons and added a 1/4 tsp. of cinnamon directly over the fresh peaches. I also added my top crust and baked at my usual pie temperature of 450 degrees for 10 minutes and then 350 for about 45-50 minutes, until the crust was golden brown. I served it with vanilla ice-cream. Everyone raved about this pie. To avoid a soggy bottom crust, try brushing a little beaten egg over it to seal it before adding the fruit filling. This works beautifully with this pie and blackberry pies, too! 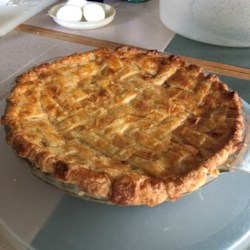