Nice combination - I like the different textures of apple and pear (I used Granny Smith and D'Anjou because that's what I had). Needs some spices, though, cinnamon, nutmeg or a combination. I've tweaked this several times and my favorite included cinnamon in the topping, pecans instead of walnuts and I used fresh cranberries, not dried. I spiced & sweetened them up by simmering 1 cup cranberries in about 3/4 cup water, the honey and a cinnamon stick and a couple strips of orange peel studded with whole cloves. Stirred that mixture (removing stick, peel & cloves) in with the apples and pears. 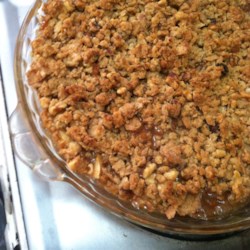