This was a fantastic recipe. However, A few changes were made, which I believe made this side dish even better. Instead of stewed tomatoes..sliced roma tomatoes were used. Also thinly sliced fresh mozzarella was used instead of packaged. Instead of a large baking dish we used small personal sized dishes and only had to bake for 10 minutes and then an extra 10 minutes with the cheese on....which was a HUGE time saver! 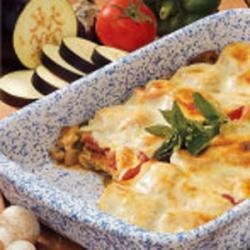