I just made two batches of these last night. I made the first batch just as written, and they were good. For the second batch I used butter instead of shortening and brown sugar instead of white, and they were even better. I did find that the butter had a bit softer, thinner dough, so I had to add a bit more flour. They were wonderful and they turned out so pretty. I put the dough in the fridge to chill before I put the chocolate layer on. After rolling, you should chill for about 20-30 minutes as the recipe says. If you chill for longer, then the chocolate in the center gets hard and makes them hard to slice. 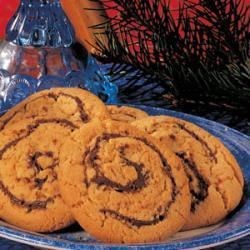