I was so excited to make these as I love mexican food and nachos and imitation crab. I began tossing things into the bowl and even before it was fully combined I thought, "this looks/smells/tastes like seafood salad". Flavoring it with only dill and paprika and onion (as written, resisted the urge to overhaul) also worried me and reinforced the salad bit. The verdict: this is a pasta-less seafood salad warmed on a chip with cheese. Which is really not what I wanted, or expected from a recipe descibed as coming from a mexican restaurant. I probably didn't see it coming because I loathe seafood salads and had never made one before. People eating who don't mind those salads called it "interesting" and asked me not to make it again or save the leftovers: they thought the warm sour cream/mayo based filling didn't marry well with the chips and melted cheese. 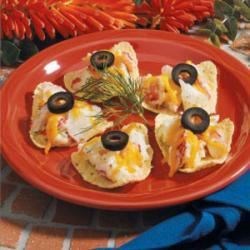