I'm updating my review - it's still a 5 Star Recipe by my measure... but last night I made some variations that made it the best I'd ever had!! I sauteed the onion and mushrooms in coconut oil (used 1:1 for butter) - thinly sliced two large garlic cloves and added once the musrooms were tender - used/cubed 1 cup of smoked, bone-in ham steak (soooo good, wish I used more than a cup) - used frozen peas & carrots, 'stead of just frozen peas - used light cream - used much much more pepper, as a personal preference (gave quite a kick!) - and used fresh grated parm from the deli, costs more, but makes such a great, noticeable difference! Best version I ever made, and this is my 5th or 6th time making! My boyfriend LOOOOOVED it... he thinks I'm some great cook or something (-; 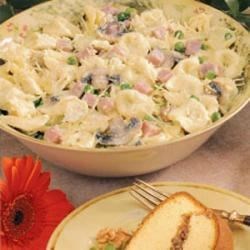