I used half gold tomatoes since my neighbor has a whole mess of them, and it added another color. This was OK but I'm mostly in agreement with those saying it lacks some flavor as is. Miracle Whip has a bit of a tang, but this did not come off in the salad. It took me a bit to figure out that I *think* it might be the milk just killing that natural tang and making it a bit of a dead mayo thing. It seems several are now adding ranch dressing mix to it, which would kick it up a bit, but that's not this recipe. I didn't think of that and had a hard time sprucing it up. As one person said, though, it is a good way to use up cucumbers and I didn't think it was too many but mine were smallish. 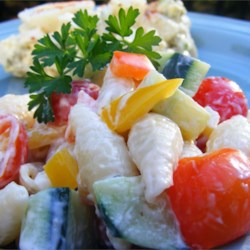