Yum. I have made this twice now, the first time following it to a tee for (tuna macaroni) & the second time just looking for macaroni salad, in which I changed a bit. I used eggs instead of tuna, miracle whip instead of mayo, red peppers instead of green, and per my hubbys suggestion, ketchup instead of mustard (which was a suprisingly pleasnt change). We like it both ways! Thanks Jennie! 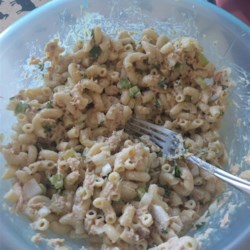