The recipe was probably four stars as is, but I made some changes and it was DELICIOUS! First, I used egg noodles instead of spegetti. I used shredded chicken that I had left over from the night when I made enchiladas. The meat was seasoned up already and was great. I used fresh mushrooms (sliced), added frozen corn, used cream of celery instead of chicken broth (just add the cream of celery and ¾ of a can of water), left out the pimentos, added 3 sliced green onions, and put ground pepper on the top of the cheese (I used Italian cheese and cheddar-and prob about ¾ of a cup total). It was delicious! The kids loved it, my hubby loved it and the left overs were great too! ? 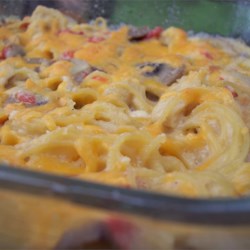