This has a very low key sugar flavor. I sprinkled it with confectionary sugar to sweeten up the final product, but would probably add 1/4 cup or more of sugar if serving it as a dessert. Beware of overcooking this; I checked it after 40 minutes and it was barely beginning to brown on top. After another 10 minutes it was golden, but also overcooked, meaning the egg was shaggy and the noodles dried out. Next time I will look for the middle to be set, instead of golden. I was not going to add the sliced pineapple on top, but was glad I did, both for appearance and overall taste. I substituted in whole maraschino cherries for the candied cherries and they worked fine. 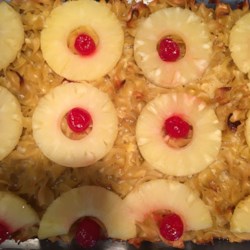