I didn't like the idea of diluting the good flavor of this dish by adding flour and water at the end of cooking. So I dredged the meat cubes in flour and browned them before adding the onions, carrots, celery and garlic. I also added more beef broth than called for because I wanted more of a soup than a stew. I also added cut up fresh green beans with the barley, and some frozen peas 15 minutes before the soup was done. This soup was very good, and I'll be making it again. Thanks for the recipe! 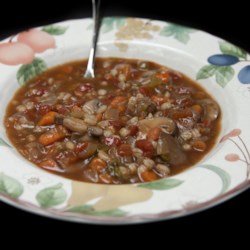