I'm not sure why everyone keeps cutting the crust recipe in half. It's just fine as long as you DOUBLE the filling. I didn't have enough lemon juice, so I used half a cup of lemon juice and half a cup of lime juice. They were fabulous. Make sure you whisk the filling until a creamy froth developes. When it bakes it will create a thin wafer of an almost merangue consistancy. Also DO NOT bake the crust longer than 15 minutes. It will be pale and not browned at all on top, but will be completely done, and a lovely golden on the bottom after the filling has been added and it's been in the oven for another 20 to 25 min. (max.)If the edges start to brown...take it out immediately. It is definately done. Be sure to watch it if you leave it in longer than 20 minutes. 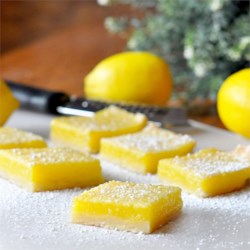