The taste is way better than any mounds bar I've ever had but it need few changes. The coconut mixture just wasn't enough to spread out with out tearing up the crust so I doubled it but next time I will just increase it by another half. I melted the chips in a doubled boiler and it cooled to quick to spread well so I made another cup or so to cove it. It does sink down in to the coconut mixture. When it cooled it was hard and turned out a little on the thick side which made it hard to cut. next time I will stick with the original chocolate amount but I will and 1/3 of a bar of paraffin wax which will make it not only easier to spread but will keep it soft when you try to cut into bars. if you don't have wax I highly suggest you precut through the chocolate when it is half way cooled to allow you cut it when its fully cooled without you breaking any chocolate. I am not a fan of coconut (I don't even like Samoa's girl scout cookies) But this recipe is so good I had to immediately package up as my as I could to send to my sister in Iraq to stop from eating them. This is surely something I will take to work to impress. 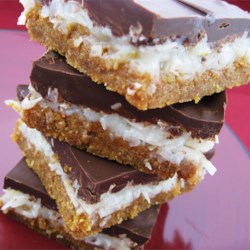