I'm not sure about several things with this recipe. First is the unusual pan size of 8x10. I used the more common 8x11. I assumed that the butter was to be melted since the recipe doesn't say. German chocolate cake mix isn't as chocolaty so next time I would use chocolate. That brings me to my next point. Why use cake mix at all? Seems like this idea would look with brownie mix. I'll try that next time making it according the box directions, using 1/2 the mixture baked for a short time and then following the remainder of this recipe for the caramel and chocolate chip layer. While these brownies tasted yummy I had to bake the first layer 8 minutes then add "20" more minutes on top of the 18. The edges were obviously more done than the middle but they weren't burnt and were slightly chewy for those who prefer that over gooey. There is nothing wrong with this recipe I just think it can be improved upon. 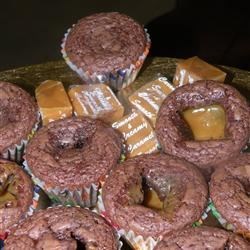