I added extra blueberries when I was done and realized I wanted more. I didn't use as much onion. Call me lazy, but I didn't cook and peel the tomatoes, I just diced them. I seeded them only a little bit (I don't mind the seeds as that's where there's the most flavor in that little pocket of gel around the seed), I didn't have the Hungarian Hot Pepper so I just used extra jalapeno -- but I still felt it needed to be spicier to counterbalance the sweet. I also just used (lots of) cilantro (have a major overabundance in the garden right now) and not parsley. It's great with chips but I bet it would be super tasty on top of some grilled salmon! 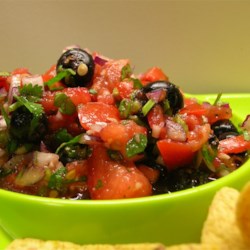