Over 2 hours of work and all I ended up eating was my left over mashed potatoes. I followed this recipe to the letter, and the finished product was gooey and tasteless and slimy. At least half of them broke in the water and leaked filling. I would be willing to try this recipe again if there were another cooking method. Can you bake these? Boiling produced such a mess; not sure where I went wrong on this one. 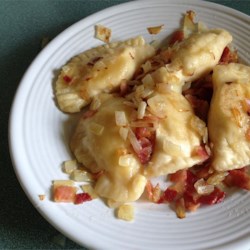