These brownies were not very good. I like the idea of the cream cheese topping. But, I didn't care for the brownie base. The batter was very liquidy and then real fudgy after baking. I used 2/3 cup chocolate chips (4oz)to replace the baking chocolate, which is basically the same. But, I like a more cake like homemade brownie. Possibly using cocoa and oil like another reviewer it may have gotten more cake like. I had to take them out of the oven before the cheesecake topping got to browned. But, the brownie part seemed undercooked unless that was supposed to be the texture? Only about 3 brownies got eaten from the pan, which is not normal in my home. I am going to stick to the Mmmm Mmmm Brownies I found on this site. I can always modify them. 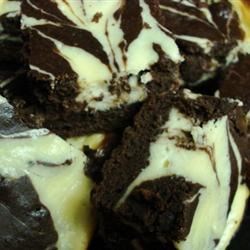