This shocked me! It was really quite tasty. I was originally put off by the SPAM idea, but was able to "lighten" this up a bit, to about 220 calories for a decently sized portion. I used 2% milk cheddar cheese, fat free plain yogurt, and turkey SPAM instead of regular SPAM. Also, I had fresh tomatoes on hand so I diced those up instead of using canned, and just microwaved my grits because I had a few packets in the pantry. I would make this again but my husband wasn't even interested in trying it. He said he was put off by the look of it. 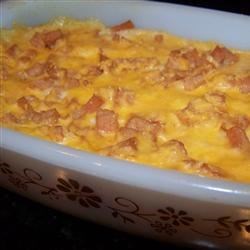