I tweaked this a bit. My oatmeal cookies tend to turn out too thin so I used cake flour instead and I increased the amount by 1 cup or so. I also used milk rather than water, omited the nuts entirely since I have small children, and I also used rolled oats that I pulsed slightly in the food processor so that they were fuller than minute oats but not as big as rolled oats. I also used butter flavored shortening entirely rather than the mix of butter/shortening called for in the recipe...and strawberry jam because it was what we had an abundance of. They turned out great but I will probably use 1/2 cake flour and q/2 all purpose next time for a less cakey cookie but hopefully not too thin. 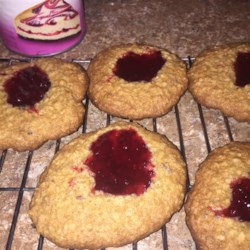