I'd have given the recipe a higher rating if I had been able to follow the recipe as written... the finished product is really quite tasty! As it was, I tried following it to the letter, but after 3 1/2 hours of chilling, the dough was till a goopy mess. I allowed it to chill overnight, just in case it would help, and still - goop. I added about 1/3 cup of flour, which I mixed in a little at a time with my hands, and the texture was much better. I was then able to roll out the dough on a well floured surface, and I also kept the dough floured on top. This worked well. I cut out the circles (I used the top of a large glass, which worked well), then, as suggested, I used chunky apple sauce as the filling. (specifically, Mott's applesauce with brown sugar and cinnamon). One teaspoon is just enough - a little less would also work - for each circle. I did have to refrigerate the dough that I wasn't using at that moment so that it would not be too warm and sticky to roll out. (This was also the case of the little dough scraps that were left each time - without being chilled, they stuck badly, even to a floured surface.) I sealed these with a fork - that worked well - they look like small tarts. I baked the first batch for ten minutes then checked them... they barely looked baked. I kept checking them every two minutes, and I ended up baking each batch for eighteen minutes. They turned out well at this time, but I'm glad time wasn't tight! All in all, I was able 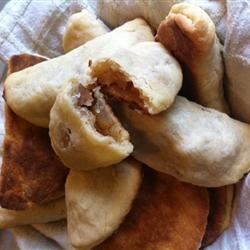