Think of this as gourmet Cool Whip. I made it to top a sweet potato pie and everyone liked it. It was still stable in the morning and I ended up eating the rest for breakfast (no pie, just the cream!). The first time I made this I did follow others suggestions and used 1/4 cup sour cream and 3/4 cup heavy cream. I upped the powdered sugar to 1/3 cup because some mentioned it wasn't very sweet. I usually don't modify recipes the first time I try them but I was feeding someone who typically doesn't care for sour cream and I was unsure how strong the original recipe would be. The second time I followed the recipe exactly (except for 1/3 cup powdered sugar, not a major change) and it was still delicious with just a slight tang reminiscent of cheesecake. If you don't tell anyone there's sour cream in this I doubt anyone would ever guess. I never had a problem getting it to stiff peaks with a deep, chilled bowl and whisk and my stand up mixer. It didn't take any longer to whip than just whipping cream would take. I can't wait to try this on apple pie. 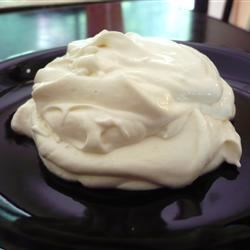