New Mexico and California chilies work too. Look for LARGE dark red dried chilies **To save time, after roasting and cleaning the seeds out, lightly simmer the chilies for 20-30min in the broth. Once soft add the chilies and the broth you cooked them in to the blender and add 1/4-1/2 cup more broth to compensate for some cooking off. AllRecipes won't let me update the recipe to say this I'm sorry!! ****If you read the reviews you'll see those who stuck with the recipe as is gave it a high rating, those who tweaked it first with other options gave it a lower rating... My rule of thumb for ALL recipes is to try it how it's written first (unless I am simply SURE there is some ingredient I don't like). Once I try a recipe as written, then I will almost always tweak it the following times I make it. I don't think it's fair to change the recipe as written and then give it a poor review... Try my rule of thumb and make it 'as written' the first time before tweaking it, you will probably still tweak it to your liking, but probably in a totally different way than you expected.******** To the reviewer that had bitter sauce: that happens sometimes if the chilies get roasted too much, it only takes 30 seconds of over doing it to over roast the chilies. If you try again watch them VERY closely, they should just start to smell nice, the color really should not darken and if they look black at ALL then they are over roasted and will make a bad bitter sauce... done it too! Love, Christine 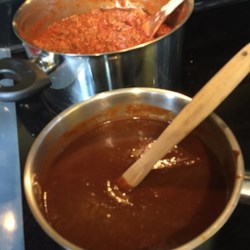