This took me almost an hour and a half to put together but the payoff was excellent. I made only a few small changes and that's to use what I had on hand. I added one extra bell pepper, I used lean ground beef and I used only one half of a can of the chipotle peppers in adobo sauce. I also added at least quadruple the amount of chili powder and oregano, I didn't use a whole tablespoon of black pepper (I just added it when needed, like when I was browning the meat and sauteing the vegetables) and I added two heaping teaspoons of cumin. This absolutely filled my largest soup pot to the brim so I split into two large crockpots to have it cook evenly and to save on power. After an hour, it's awesome. It has a serious bite to it from the chipotle peppers in adobo sauce, I'm really glad I asked for advice before I threw in the whole can. (And it was a small can, too!) I will recommend that you puree your chipotle peppers in with some of the tomato sauce so you get an even consistancy and don't have chunks of hot. Killer chili. 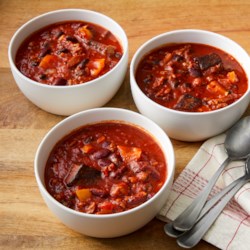