I have made two other recipes of lemon bars and on both of them the end result was that the liquid filling kind of melted in with the crust. On this recipe however, you can see a nice shortbread crust that was about 1/4 inch thick and 1/4 inch of the filling on top of that. I increased the lemon juice by one more large lemon and got about 3/4 of a cup of lemon juice. I also zested two of the lemons and added that to the liquid filling before cooking. I love it super tart, but I think most people might like it better a little less, so I would suggest using 1/2 cup of fresh squeezed lemon juice. Also,I let the crust cool for until it was just room temperature. To speed this up I put it in front of a fan for about 15 min. and it worked great. Then when the crust was cooled down I poured the liquid filling over it. I cooked the crust first for 20 min. then when returned it to the oven with the filling, I cooked it for about 25 min. I ate some after it came out of the oven, but about 4 hours later, after being in the fridge, they were the perfect consistency. A nice firm crust, and the filling was like a really firm pudding that held its shape. I also added a teaspoon of salt to the crust recipe. I made mine in a 9 x 12 pan. Next time I am going to double the recipe so that the crust is thicker and their is a thicker amount of filling on top. 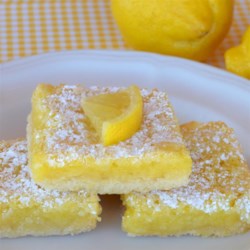