A five-star recipe for sure. Although the recipe doesn't say when to first put the glaze on the meat, I did it right at the start, and because I didn't want to grill outside in the freezing cold, I pan-seared the meat on the stove, placed it in a baking pan, poured sauce over, and baked until internal temp 160f. was reached. One other thing - I didn't have apricot preserves so in its stead I used orange marmalade (which is tart so I eliminated the lime juice). This was so moist and tasty, bit of a bite, served with oven baked fries and Amish Cole Slaw - a great meal. 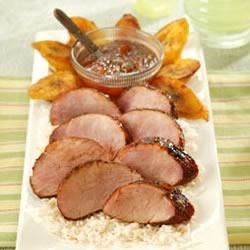