So good! I read most of the reviews and was really confused as to what to expect. Half of them said the cookies came out really cakey and puffy, and the other half said they were too flat. I don't like either extremes and really wanted a cookie that was right in the middle. I got it! I followed the recipe in the basics (was going to use less flour as some of the reviews stated, but when I was adding it, they looked like they needed all 2 1/2 cups), except did 1 tsp vanilla instead of half almond, and added more macadamia nuts and white chocolate chips. Used real salted butter, and it wasn't extremely softened, which I think helped. Dropped by tablespoons instead of teaspoons because teaspoons always seem too small. Baked for 9 minutes and they came out just undercooked in the middle, which is exactly how I like them. They were perfect. Hope this helps! 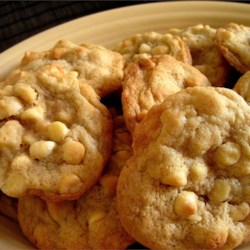