These are actually very good. I followed the recipe with the exception of the following: 1. I made half a batch 2. I used 1 cup spelt/ 1 cup white flour 3. I used becel olive oil spread instead of shortening. 4. I dropped from teaspoon and flattened as suggested by another reviewer. 5. And I added a pinch of seasalt. The result was awesome & vegan. Bonus: house smells so yummy!! Thanks! 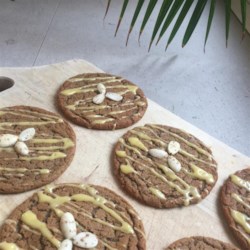