Thanksgiving tends to follow a time-honored menu: turkey and/or ham, gravy, potatoes, dressing or stuffing, casseroles, and (of course) pies. But looking at the most-searched-for unique Thanksgiving recipes by state, Allrecipes discovered some surprising preferences as well as some we may have predicted: Minnesota loves wild rice stuffing, Texas makes tamales, and Georgia's gotta have sweet potatoes. Here's what your state craved when we crunched the Thanksgiving numbers.

A drop biscuit topping sets cobblers apart from crisps and crumbles — and makes the dessert a Southern favorite. When wed with sweet potatoes, the result is a Thanksgiving-worthy dessert that Alabama residents keep coming back to.

A smaller breed of chicken, Cornish game hen tastes familiar but stands out as a holiday meat. No one can overlook an entire bird on their plate, after all. "This is the best Cornish game hen recipe I have ever found," Shannon Green says. "If I used four hens, I would double the sauce because when I boiled the sauce down it was perfect for two hens. Absolutely wonderful."

Cream cheese, sour cream, butter, and milk give our Creamy Twice-Baked Potatoes their name. Finish them off with paprika for a Southwestern kick.

"Steamed and then baked, these scrumptious green beans take on great flavor, because they are wrapped in bacon and bathed in a savory sauce. This recipe is best when you marinate the bundles overnight." — JESSICABAZEMORE

Persimmons begin to crop up in California in late September. While this underrated fall fruit doesn't contribute much to this spiced quick bread's flavor (that's all cinnamon and nutmeg), it adds to its moist texture.

"Sweet potatoes come in different colors, from white to yellow to orange to orange-red. The darker the inside, the sweeter it is. I chose white because I was adding maple syrup and brown sugar, but any sweet potato will do," recipe creator Yoly says.

"The texture is actually closer to a pudding than a classic crème brûlée, and of course, the star of the dish is the crisp sugar top," recipe creator Chef John says. "This is great for your busy holiday schedule since you can make them the day before and then finish the sugar torching before you serve."

What sets this risotto apart from other recipes? Mashed butternut squash. And it's enough to earn this recipe 400 (and counting) five-star reviews.

Bake green bean casserole in muffin tins or ramekins for a fun single-serve take on a classic.

Beating the egg whites before transferring them to a mixture of whipped sweet potatoes, milk, and egg yolks gives soufflé its cloud-like texture.

Yellow cake mix, butter, and pecans top this cake and take credit for its signature crunch. "Make sure you cook it long enough so the pumpkin layer sets up and the top layer gets cooked through so it has some crunch," Kelly McNamara says.

This mandarin orange and pineapple Jell-O salad resembles a favorite Idaho recipe, though some opt for one fruit over the other.

Stick with a short-and-sweet list of ingredients to make these Glazed Carrots: butter, brown sugar, salt, and white pepper.

You can give this no-bake pudding a fall makeover with mellocreme pumpkins and green frosting. After all, if you live in Indiana, you're never too far from a pumpkin patch.

Snickers salad makes an apperance at parties and potlucks all over Iowa, and holidays are no exception. This candy-studded dish may be the one "salad" anyone wants to eat on Thanksgiving. As reviewer Jenny says, "kids come running for this one!"

Raw eggs (stick to pasteurized eggs) give our French Silk Chocolate Pie I a light, fluffy texture that's similar to mousse. Top each slice with a generous scoop of whipped cream.

Though original recipe called for walnuts, most versions of Kentucky Derby Pie take advantage of Southern-grown pecans and use them instead.

"Mirliton (chayote) squash is the vegetable that is used to make this wonderful dressing. It's very popular here in Louisiana around the holidays." — MOUNTMAN

"This is an old family recipe my grandmother used to make me when I was a little boy," recipe submitter Cecil says. Cornstarch gives this Maine favorite a thick, pudding-like consistency.

"The best no-bake banana pudding you will ever find," recipe submitter Kenneth Strother says. "Or so I've been told by many."

A classic New England dessert, apple crisps can hold their own against Thanksgiving pies thanks to their spiced flavor and crunchy topping.

This Midwestern favorite mixes pistachio pudding, whipped topping, and canned pineapple into a fluffy treat that tastes even better with mini marshmallows, fruit cocktail, and mandarin oranges stirred in.

Wild rice abounds in Minnesota, so it's no wonder the grain would earn a prominent place at Thanksgiving dinner.

"Chitterlings or pork intestines are a favorite among Southern families. Traditionally, they are prepared during the holiday season," recipe submitter KERYNE says. "Be certain to pass the vinegar and hot sauce."

This Southern dessert makes our list once again, this time thanks to the people of Missouri. With more than 3,000 ratings averaging fives stars, this banana pudding recipe won't let you down.

"I had a similar recipe years ago and had lost it," reviewer MOBELIA says of this top-rated recipe. "When I found this, I made it for my family at Thanksgiving. My boyfriend ate about a third of it before we even got to my mom's house."

As one of the nation's largest corn producers, Nebraska doesn't take corn casserole lightly. And with butter, an entire container of sour cream, corn bread mix, and creamed corn, neither does this recipe.

"This recipe has been in my family for years and years. We make it at every holiday family get together," recipe submitter smviolante says. Ambrosia strikes a nostalgic note for people all over the United States, and Nevada is no exception.

Both New England and Amish country claim whoopie pies as their own creation. Regardless of their origin, the treat remains a favorite in states like Pennsylvania, Maine, and (of course) New Hampshire.

"Easier than you think! I put pecans in the filling. Amazing," Ruth Lynch says. "I made my mom one, and she's already putting in orders for Thanksgiving as gifts for her friends! I will definitely be making this again."

"People love puffy food, souffles being one of most versatile," says Chef John, who will walk you through the recipe. "As long as you don't knock all the air out of the egg whites in the batter, not much can actually go wrong. Since mashed sweet potato is the base, these souffles are even easier than the traditional method that requires a saucy base."

Cookie Salad holds a prominent place in the hearts of Midwesterners. But folks in North Dakota seem to love this cookie-topped concoction of vanilla pudding, buttermilk, whipped topping, and canned fruit most of all.

"It's a very sweet, rich pie, which cannot be described as anything but marvelous. This is not my personal recipe but was passed to me by my grandmother and from her grandmother and so on and so forth," recipe submitter T. Knecht says.

"This is the most incredible recipe! I've been making it for a few years now. I make about six or eight at a time, and everyone I know waits all year till I make them at Thanksgiving." — jennifera

"These potatoes are perfect for Thanksgiving and Christmas! They are my husband's family tradition in Pennsylvania. This is the actual recipe from my husband's great-grandmother," Shauna Rhoads says. "There is a family 'secret ingredient' that I have never been told, and so it's not in this recipe. I believe it will still be yummy without the 'secret,' but if you happen to know what that is, then add it in!"

With Rhode Islanders searching for stuffed mushrooms, our top-rated Dinah's Stuffed Mushrooms seem just right for holidays in the Ocean State thanks to their clam filling.

You can count on this South Carolina classic to show up on special occasions, Thanksgiving included. This sweet bread stuffing pairs well with ham or roasted turkey.

It's not just Delaware, Montana, or South Dakota. People all over the United States love this salty-sweet dish. Read our Strawberry Pretzel Salad's reviews for proof — and plenty of tips.

"I never had Fudge Pie until I moved to Tennessee. A friend from church gave me this exact same recipe. I did have a deep-dish pie shell, and so I scaled the servings to 12, and it worked wonderfully! My husband and I loved it. This is going in the old recipe file to hand down to my daughters!" — srevels

Tamales are a Christmas tradition in Central American. And with Texas searching for tamales above all else, it seems Latinos have carried the tradition over to Thanksgiving. But we wouldn't be surprised if non-Latino families include tamales on their Turkey Day menus, too.

It's said this sweet pasta salad originated in Utah, where it remains as popular as ever. Several reviewers omit the coconut, but that's just a matter of taste.

Vermont produces more maple syrup than any other state, so it's only natural that the sweetener found its way into the state's favorite desserts. Just be sure to use real maple syrup, not a corn syrup-based version, recipe submitter CAROLEALANA says.

With apples being a major crop in Washington, you'd expect apple pie to be high on the list of favorite Thanksgiving dishes. But what you don't expect is Vegan Pumpkin Pie. Yet, there it is. While it does contain soy, our Pumpkin Pie (Dairy, Egg, and Gluten Free) accomodates most eaters.

West Virginians can take advantage of locally-grown cranberries with one of our many cranberry salad recipes. "My family has been making this since I can remember," reviewer mommom says. "I put it in a old Tupperware Jell-O mold and fill the center with fresh cranberries. It is so pretty and so good with the turkey."

Thought you'd seen the last of Frog Eye Salad? Well, it's popular in four of Utah's closest neighbors, as well: Idaho, Nevada, and (of couse) Wyoming.

Try one of Our Favorite Non-Traditional Thanksgiving Ideas. Plus, explore our entire collection of Thanksgiving Recipes. 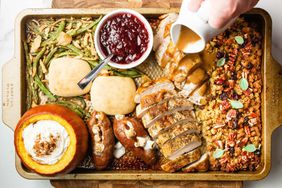 A Thanksgiving Menu for Two 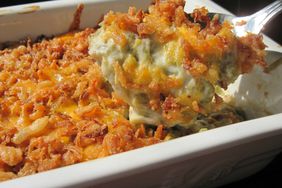 15 Vintage Recipes to Enjoy This Thanksgiving 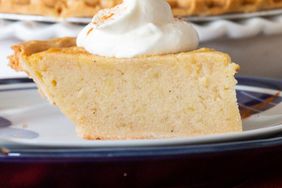 Our Top Thanksgiving Recipes With 1,000+ Reviews 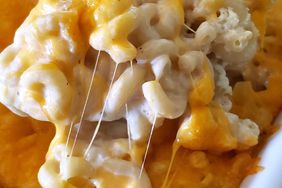 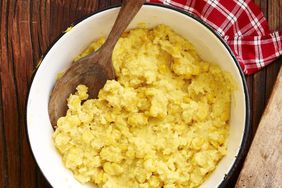 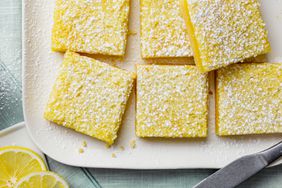 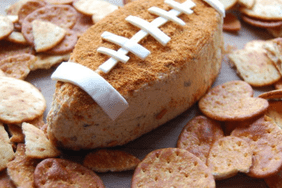 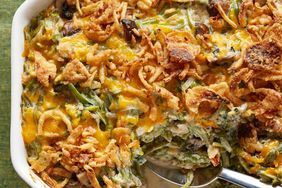 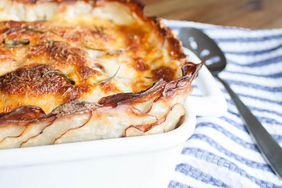 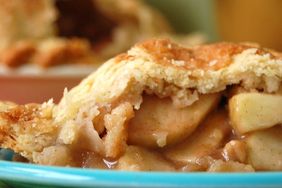 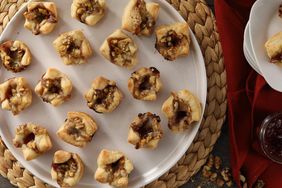 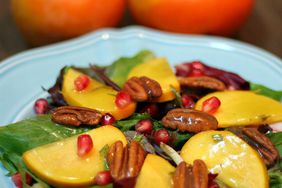 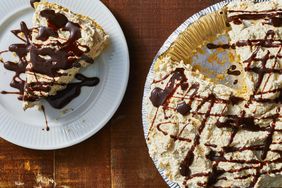